The internet is increasing with pages, campaigns and groups being made to support of the legalisation of gay marriage. This is to replace Civil Partnership which allows homosexual couples to have their relationship legally recognised, thanks to the Civil Partnership Act 2004. However the term “Civil Partnership” has developed an inferior status in comparison with the heterosexual “Civil Marriage”, but, for those who are not religious, Civil Partnership is synonymous with Gay Marriage. I will explain.

The majority of the differences between Civil Partnership and Civil Marriage actually allow the former additional choice in how the wedding is conducted, while “Marriage” is more constricted by institutional laws. For instance, the registration certificate does not need to be signed at the wedding and verbal exchange is not essential. This means a Civil Partnership wedding can be held in private and conducted in a manner that allows the couple to use originality and creativity which otherwise would not be possible.

The issue is religion. Civil Partnerships are prohibited to contain religious references; this includes readings, music and the premise in which it takes place. The Civil Partnership Act 2004 states “no religious service is to be used while the civil partnership registrar is officiating at the signing of a civil partnership document.” Consequently, Civil Partnerships are not recognised by the Church of England at this present time. This goes to show that even now, in a world dominated by science and technology the Church still has more power over society. Although rather than viewing this as a constriction to our freedom and rights, this can be seen as being free from the institution of the Church; so once again, the Civil Partnership wedding becomes less institutionalised and more personal. If one wishes to mention divinity in their wedding, it can be done with the mind, the heart and in prayer before and after the wedding. This shows real dedication and spirituality.

In spite of this current state of affairs “Partnership” when used in “Civil Partnership” is actually a religious term. This dates from Old English.

Since Old English ‘ship’ at the end of a word (suffix) means to ‘create’ or ‘ordain’ (‘ordain’ – to invest with holy meaning). In the context of a wedding the meaning is obviously ‘ordain’ as this is what the Civil Partnership registrar does. Therefore religious connotations are inherent in the meaning! So not only is it discrimination that gay couples cannot have an openly religious wedding ceremony, it is also a total contradiction.

However, come the end of the wedding the couple are not pronounced ‘husband and husband’ or ‘wife and wife’; instead the couple are pronounced ‘Civil Partners’. This assumes the terms ‘husband’ and ‘wife’ belong solely to the concept of heterosexual marriage, but where is the evidence for this? Also Language continuously changes: Dictionaries do not dictate the language we use, it is the language that we use which is recorded in dictionaries. For instance look at how the meaning of ‘gay’ has changed over the years! Therefore there is no reason why the terms husband and wife should not be officially used by homosexual couples. Furthermore there is nothing to stop “Civil Partners” referring to their spouse as husband/wife. Nevertheless there is an exchange of names, and change of title for lesbian couples.

What it boils down to is allowing homosexual couples to have overtly religious ceremonies and to officially use the terms ‘husband’ and ‘wife’. So, it may help if we are specific in our demands when campaigning to the authorities to recognise LGB rights. Until the government make those bureaucratic adjustments, in reality non-religious homosexual couples do indeed marry, it just comes under a different name. For religious couples we can make it religious ourselves and use the title of our choice.

I would love to hear readers views on this. 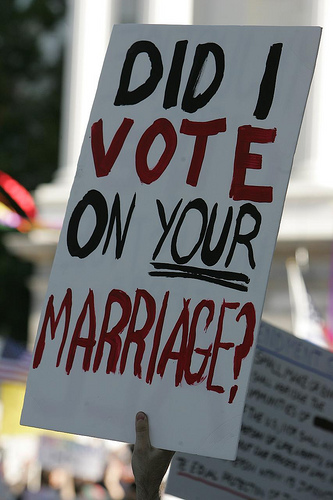